The weather today is a bit gloomy. A pity really, as it has been beautifully sunny for the last few days and the ground has really begun to dry out. I actually went out without a coat two days last week! Spring is well on the way and gardeners are complaining that their vegetables will be at risk of a late frost if they develop too quickly. With Irish weather, you can’t win. It is, as they say, “hopeless altogether”. 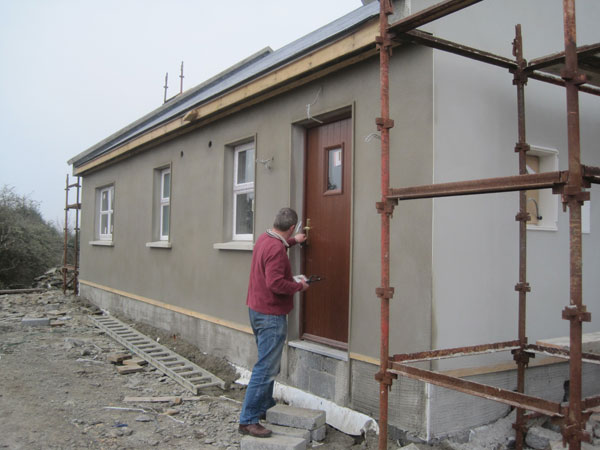 Although we have been up to the house on three or four days each week, I haven’t been taking pictures. There has been constant progress, but there didn’t seem to be anything particularly worthy of a photo going on. But I was wrong. Now I look at the pictures I took today, and notice all the small jobs that went on in the meantime that I haven’t recorded, e.g. the finished roof and the battening for the decorative plaster bands surrounding the wind 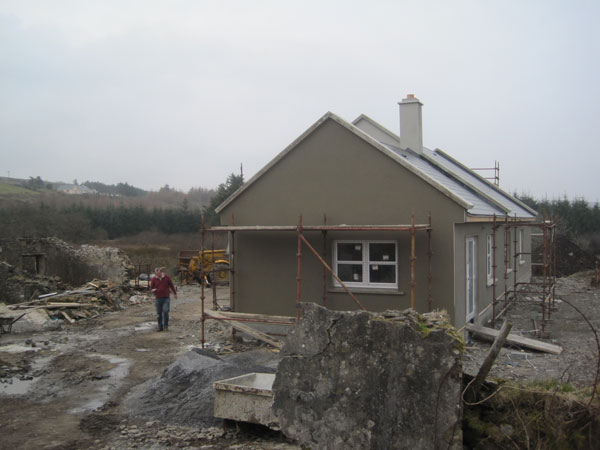 The plasterers came back at the end of February to do the final coat of plaster (render) on the middle gable. Now dry, it has changed colour completely from a deep sand to quite a pretty pale grey. Last week they did all the door and window bands and, today, we arrived just as they were finishing the plaster around the rest of the house. Don’t the high barges look good now the roof and plaster is finished?

Inside, the roof has been insulated and the ceilings plasterboarded. The “hot press” (the airing cupboard*) has been built in the utility room, with the door opening off the main hallway. The electricians and the plumber have finished their “first fix”, and John has installed miles of cabling for the satellite dish, terrestrial TV aerial, broadband and IP telephone, as well as HDMI and speaker cables … no more trailing leads for Foggy (our fat grey cat) to chew on! 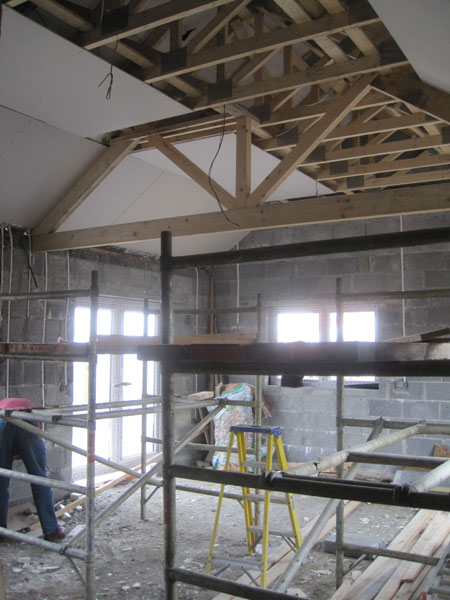 The projector for the home cinema system will be attached to a beam that spans the centre of the living room. I wondered whether Pat wouldn’t think me mad, wanting a vaulted ceiling and a false ‘feature’ beam to add a bit of character to the room. But he suggested basing the design on the exposed beams from a disused church in north Clare, and I think he’s done a grand job.

* In Ireland a “press” is the most usual way of referring to various types of cupboard, including airing cupboards, wardrobes, kitchen units, sideboards, or dressers.