John came down with a terrible cold on Wednesday and spent most of the day in bed.  On Thursday, the whole west coast was being buffeted by storm-force winds and torrential rain.  Local school children were sent home due to an electricity blackout. We barely set foot out of doors and couldn’t, for a moment, imagine that any work would be done.  On Friday, the sun came out again and we went to have another look at the site. 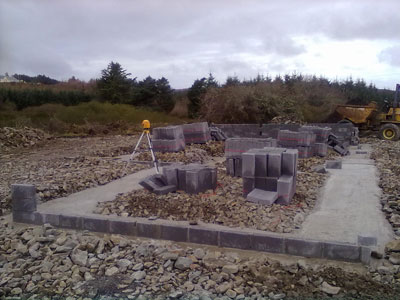 In fact, Pat’s men had turned up for work on Thursday morning, but there was little they could achieve.  They laid out some corner blocks and went home. But, by mid-morning on Friday, the first layer of blocks had started to be laid around the outside walls of the new house and, at the far end, a double skin had been almost finished to floor level. We marveled at the speed of the work, until Marie explained that the men get paid per block! 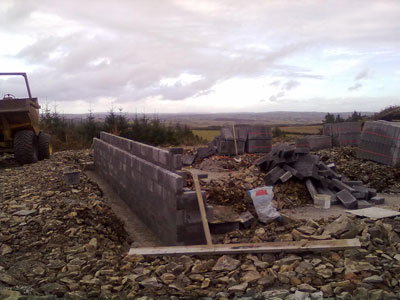 The concrete foundation had been laid in steps to take account of the stability and level of the rocky ground underneath.  Remember that there was a 4′ 6″ fall between the old entrance gate and the chicken shed? In order to have level floors, it was necessary to compensate with three extra layers of blocks at the far end. In this picture, the top of the inside layer of blocks will be about 6″ below floor level by the time the foundations are filled with stone and a radon gas barrier and concrete skin added. 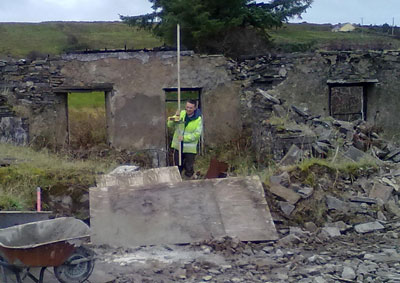 We were amazed at the apparent difference in height.  It was difficult to see with the naked eye that the foundations would be level so, to reassure us a bit, Pat demonstrated with a laser theodolite.  Then, just for fun, he showed us the difference in height against the original farmhouse.  Look at where Pat is holding the laser pointer.  That is where the floor level of the new house will be. 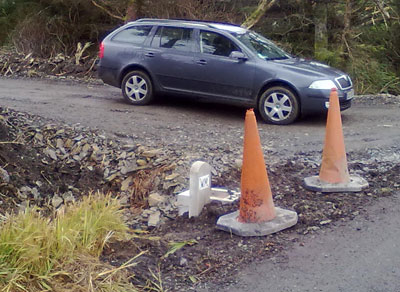 Pat’s men weren’t the only people that were busy over the last day or two.  The Water Board had been to install our supply at the roadside.