The sun came out today, which was what we had hoped for as the plasterer was due to render the middle gable so that the roofer could complete the slating. We visited the site around 2.30pm, and got quite a surprise …

From the road above, we couldn’t see anyone working but something definitely looked different. It was only as we turned off onto the private road that I realised what it was. The whole house had been rendered with its first scratch coat of plaster! The reason we hadn’t seen anyone working was that the plasterers had just started the last wall, the eastern gable end. 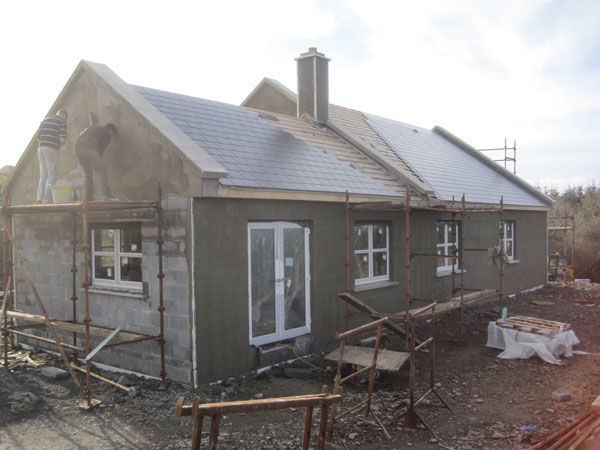 To give you some idea of the speed with which these guys work, as we pulled up, they had just applied a few dabs of plaster around the edges of the gable. By the time I had pulled on my wellingtons and got my camera out, they had done the gable and were starting on the wall above the windows! Compare this photo to the one at the bottom to see the difference 30 minutes’ work makes. The entire house took them no more than about 7 hours from start to finish.

These guys are good. They are Pat’s best men and he is keen to keep them working. But today’s work is a prime illustration of why Irish builders will always find employment – even if they have to leave Ireland to do so. We joked about their English counterparts, of whom we have encountered many over the last few years. Must have a fag and a cuppa before even putting their overalls on, stopping for elevenses, disappearing round the corner to the pub for lunch, packing in early because of poor light, the possibility of rain or lack of materials … and not forgetting numerous cups of tea and fag breaks thoughout the day!

Anyway, I digress. There was more. 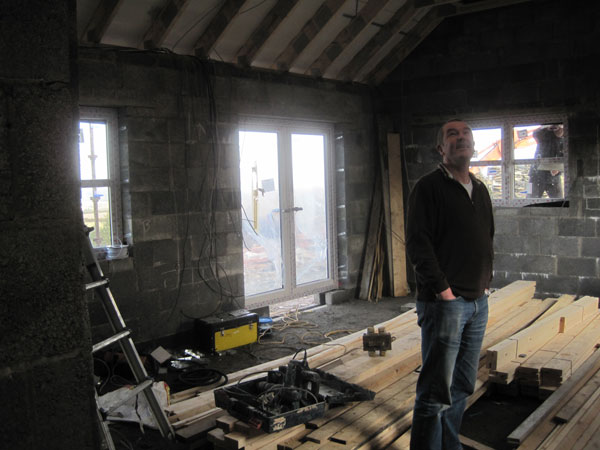 John had remembered something that we had omitted from the plan we gave to Joe, the electrician.  “No problem”, said Pat, “Joe’s guys are inside.” So we clambered in through the front door (I’ve never bothered to ask about the 18” step up. I assume it is temporary), to find the whole interior swagged with festoons of electric cable. Three electricians were on site, running 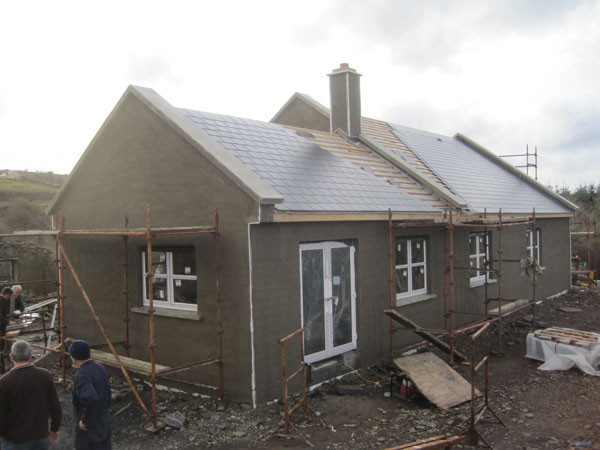 cables and channeling in conduit and backboxes for all the sockets and lighting that Joe had marked with chalk on the bare block walls.

All this had happened since yesterday. John and I just stood there for a moment, open-mouthed, taking in the sheer wonder of it all!