First things first.  The old house had a traditional layout consisting of a large central room in which all cooking and entertaining took place, with one large bedroom at one end and two smaller bedrooms at the other (one of which, John remembers, was used to store salt pork, and whole sides of bacon hung from the ceiling).  The old house can be seen behind John, Pat (our builder) and Tom (the architect).  Only one gable end and the back wall remain. The other gable end was deliberately pushed in shortly after the fire at a neighbour’s request, and the other stone walls gradually succumbed to the wind and the weather. 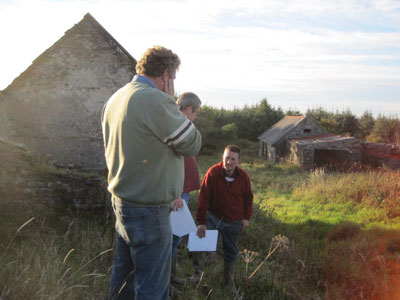 The other buildings in this picture are the old cart shed and chicken shed, the latter of which got nicknamed “Brigid’s folly” after I suggested that, being the only building with a roof, we might turn it into some sort of studio.

Notice how overgrown the whole site is.  In this second picture, you can see 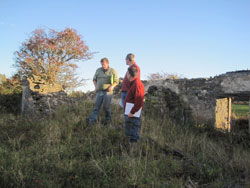 the three men standing on top of or inside the ruined front wall and you get an idea of the size of the old farmhouse. It was “tidy” by today’s standards.

One of the first problems facing Pat was the slope of the land.  Using a long tape measure (expertly held in place by Pat’s daughter, Ciara) as a guide, he effectively demonstrated that the difference in level between the entrance gate and the wall of the chicken shed was a full 4′ 6″. Clearly he would need to level the land before we could agree where the new house should be sited. Also, there was the slight issue surrounding the legal boundary between our land and the forestry.  From the available copy of the 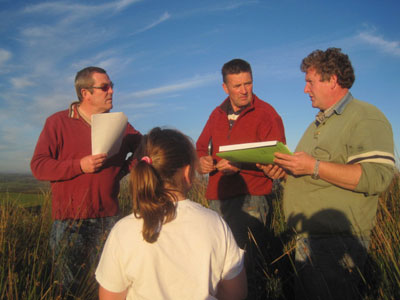 Land Registry map, it appeared that the boundary ran from the back wall of the calf cabin (not shown) to the far corner of the chicken shed.  However, this was unlikely to be entirely accurate as the original map had been reduced to A4 and the boundary had been drawn by hand with a thick pen. For our purposes today, it would have to do.

There were forms to fill and a commencement fee to pay before Pat could start building, but he said he would make a start clearing the land while we made a flying visit to France to exchange some furniture.