We didn’t even make it in through the pub door last night, when Tom Quealy, a local undertaker, greeted us with the words, “I see ye have the work started.” 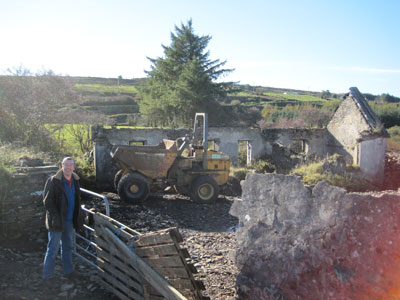 We had been to France and back with one load of furniture, dodging the fuel shortages, and had now arrived in Ireland with a 7.5 tonne truck containing the rest. In the meantime, Pat had been busy.  The calf cabin and cart shed was now gone and the stones used to level up the site.  The reek of turf from in front of the 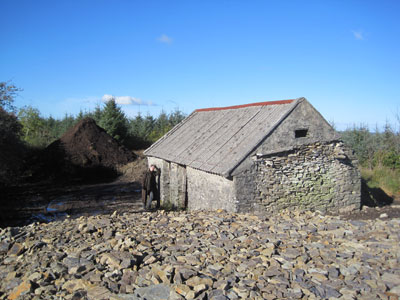 plot had also been moved and, with the rest of the useable topsoil, had been piled in a mountain behind the chicken shed.  Now that the the grass, brambles and rushes had gone, it was easier to see the outline of the old house.

The chicken shed would soon go too. But, for the moment, it was providing a useful reference point.  Using his tape and some spare blocks, Pat map 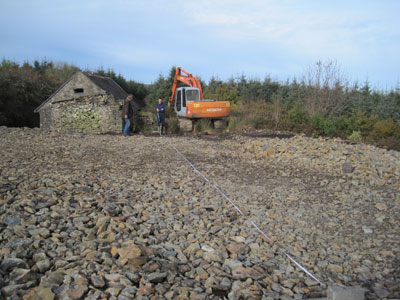 ped out the outline of our new bungalow. Look back at the previous entry on 13th October.  It is hard to believe that this is the same site.  And, when you look at the quantity of stone involved in leveling it, it is equally hard to believe that most came from just two buildings. We can truly say that the new house will be built on the foundations of the old one. 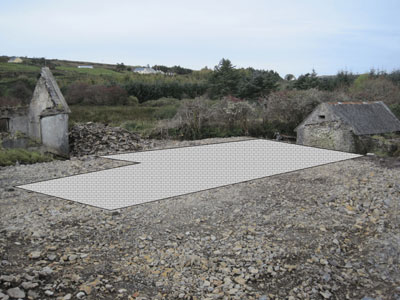 Once Pat and John had positioned all the blocks to indicate where the various corners of the building would be, I took a photo and “joined the dots” to create a rough footprint showing the positioning of the house.